Obviously, in order to determine the speed of moving object in 3d space, the ratio of a position change to time change is required. Therefore, continuous 3d positioning of an object is an obvious prerequisite for detecting the object's speed, so several technologies such as the laser, radar, and vision are being used in order to extract the position. Stereo vision (using tow calibrate camera) technique is utilized for measuring passing vehicles speeds in our offered system.

For each frame of the tow cameras streams, depth measurement procedure will take place as obtaining parallax of each pixel of tow image as disparity. Then by utilizing some geometric and filtering mathematics and sophisticated image processing algorithms, first distance and then the accurate speed of each vehicle in the scene will be extracted.

Some capabilities of system’s speedometer:

In order to accurate speed measurement, knowing the relative position of the object is required. For this purpose, some other systems are highly dependent on the geometry of road relative to them, for example, we cannot use them in Curvature roads. And some of these systems mark on the road to maintain their relative calibration validity. But given that this product is based on stereo vision and in one hand, main calibration is inside of the system and on the other hand this system has the ability of distance measurement for any object in 3d space, the speed accuracy of the system is independent of the road shape and there is no requirement for marking the road.

Another important and distinct difference between this system and some other vision-based systems is that some of them use license plate image for identification and speed extraction of the vehicles. Measuring the speed of the cars in these systems is highly dependent on the finding license plate; because transposition of the car is measured based on movement of its plate in corresponding sequential images and therefore because there is a relatively great probability of loosed plate (damaged, cars with No license plate, unstandardized plate formats or engine error) these systems has intensive weakness in their nature. Another problem of such products is relatively low accuracy in speed extraction due to the influence of mounting place of the license plate.

Since our product uses all of a vehicle's path in three-dimensional space in order to measure the speed, it performs independent of the plate, so the speed of all types of vehicles with or without a license plate, damaged or unstandardized plate will accurately be calculated.

Speed precision and testing it

Currently, this product is operationally used in Iran‘s roads and high ways. And up to now, police department tested More than 12 thousand passing vehicles to ensure the accuracy of systems in various conditions. The result of these tests confirmed that the average error of speed measurement is less than one percent and maximum error founded is 4%. Two devices were utilized in these tests: GPS and Laser gun.

In order to test the system with GPS, a high data rate GPS module installed in a car and it passed through the system's speed detection range. The GPS data logged with a very precise time as well as the location. Comparing these data with the system data result in the system's accuracy.

A laser gun system is also used which is equipped with a camera to log the passing vehicles images (and films) with their speeds and distances (from the laser gun, as they are in the predefined range). Comparing these data with the fixed speed camera data results in the system's accuracy.

Since wide view angle imaging sensors are used for vehicle detection and speed extraction, therefore there is not an exact limit for the number of lanes and lanes (6 lanes or even more) can be covered only through some optical device changes. 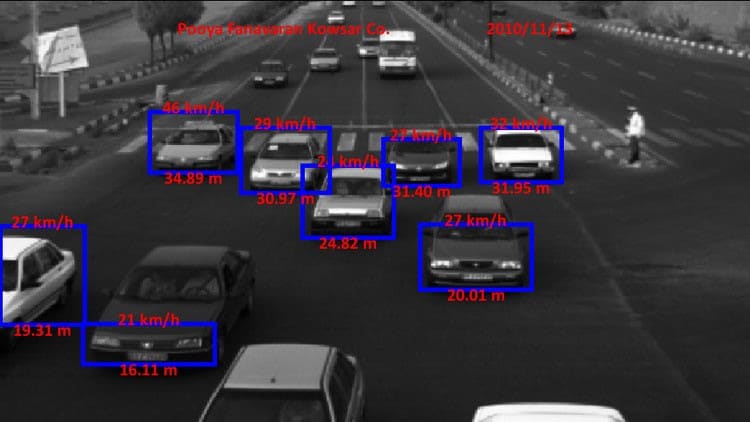 In several tests with a high amount of working time which is taken from this product, the amount of missed or unrecognized vehicles was less than 2%. Also, the proper consistency of this system reduces the missing probability to the least possible amount.

This fixed speed camera has been operationally utilized in mountainous and desert roads it preserved its efficiency in all different weather and light conditions. As you can see below these are the results in heavy snowfall and blizzard conditions.

Working in Fog and Snowfall

Longitude speedometer range: in order to detect and separate the vehicles, wide imaging is used, so through applying proper lenses, an appropriate depth from the road would be available. The capability of good imaging makes it possible to detect and determine the speed of the vehicle from distances up to 100 meters. Since detection and speedometer of cameras are performed from long distances, the probability of missing cars would be reduced and the accuracy of speedometer would be higher than the systems which determine the speed in lower ranges.

Since the wide imaging system is utilized in this speed camera in order to recognize vehicles, the sensitivity to overlapped cars will decrease dramatically. In fact, as much as vehicles are detectable from both stereo cameras point of view, they would be recognized. 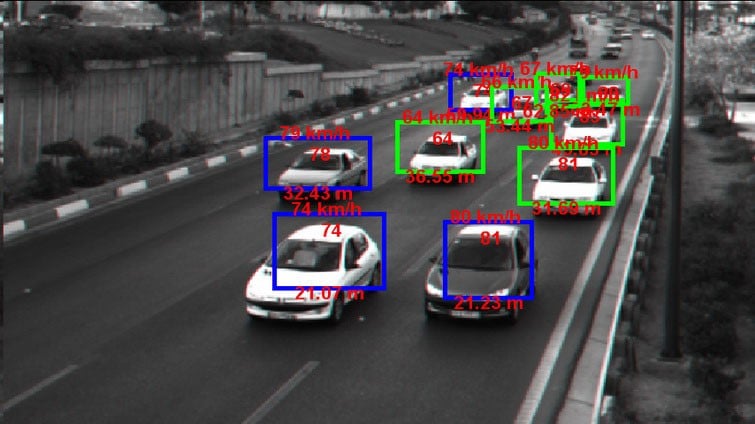 Since this speed camera utilizes stereo processing technology for speed metering, the accuracy is directly related to stereo calibration. This point is elegantly considered in camera design, therefore calibration process only needs to be performed once in the laboratory and then it would be installed in the box. This will reduce the calibration procedure in the setup site and as a result, mass production and installation would be facilitated.

Since traffic rules and limitations are dissimilar for different lanes, detecting passing lane is necessary and since stereo processing technology is applied in this speed camera, the 3D location of vehicles can be driven in road coordinates. Therefore, passing lane determination and solid line crossing violation detection can be performed.

This fixed speed camera track and recognize all the passing vehicles in its detection range regardless of their approaching/ receding direction. So this product is capable of detection and speedometer in both receding and approaching directions. As Iran's police requested, it is currently applied for approaching cars in Iran.

In some other vision-based systems, Shape and geometric properties of a car would be used in to detect and separate it and since a car shape assumed to be squared or any other assumption, it is obvious that these assumptions may lead to some errors in the system. But in our system, due to strong stereo vision based algorithms, any object and its 3D dimensions and velocity will be calculated and this results in the ability of simultaneous detection of large trucks or motorcycle and usual cars and even separating vehicles with partial overlap.