λ sorter is a kind of free-fall sorting machine, which is applied in order to sort grains, nuts, cereals, etc. The crops will be divided into 2 groups: accepted and rejected. The functionality of this sorter is as following:

This process is accomplished by a few centimeters passage during a 10 millisecond (0.001 s) time interval. After passing this few centimeters, the grains would pass a line which includes dozens of compact air nozzles. The mentioned air nozzles, are separately controllable and they can be controlled from the main processor.

If a grain was in the rejected category, the front pumps would be activated and the mentioned grain would be sent out of the group by a blow jet. Thus, all of the accepted grains continue their path and directly enter the accepted grain container or outlet. The out of path grains, which are in the rejected category, will enter the related outlet. It is worth mentioning that a 360˚ image would be taken from the front and the back of the rejected and accepted grains and the features of each grain would be extracted by the processor through these images and data from the other sensors and lasers and then the outputs would be controlled; the real-time statistical performance data would be displayed on the monitor and also stored in the memory of the system.

This system is able to use UV radiation in order to sterilize the passing grains. With the usage of this spectrum, it is possible to detect the existence of Mycotoxins (including Aflatoxin) which are one of the main issues in the export of products such as pistachio.

By equipping this device with a laser, it is possible to detect the internal characteristics of the grain.

The most important characteristic is the detection of being nucleated in date and summer fruit sorting. 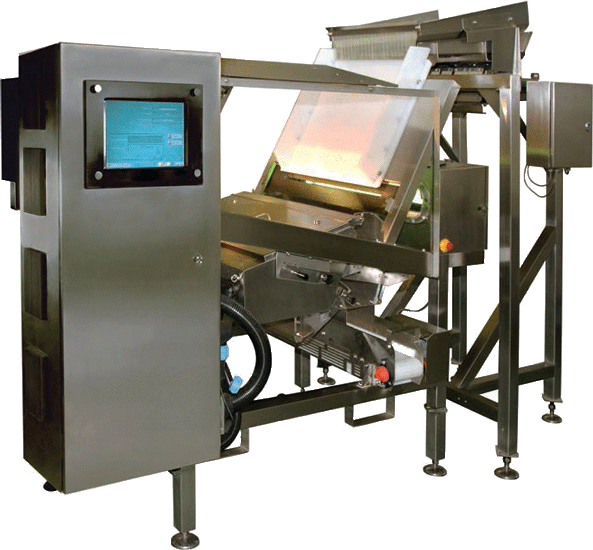 The performance of the machine: