Functionalities and the processing engine

Image processing specially ANPR is done thoroughly by the Karabin camera’s internal processor so there is no need for any other external unit. This image processing engine has especially been developed for ANPR purposes and highest performance accuracy has been achieved by combining different methods and algorithms in this field. This is worth mentioning that, these algorithms are implemented by optimization and appropriate performance on the embedded processor, in a real time way. 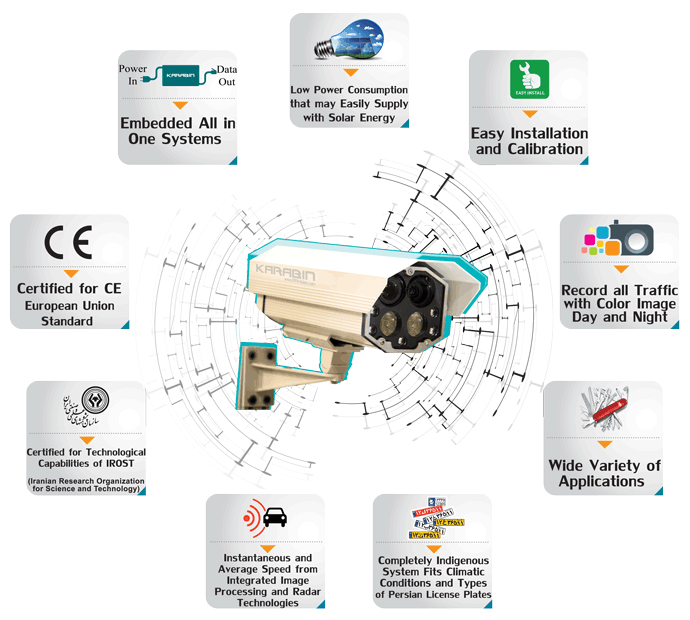 Power and accuracy of processing engine

By developing image processing technologies and increasing the potency of economical processors, the prevalence of ANPR software is increasingly growing. Still, not any typical ANPR algorithm can overcome the challenge of serving in practical real conditions. ANPR engine of the Karabin embedded camera has achieved so high level of robustness that is so hard for other software and systems to compete with it in power and quality. This is done through the experience of many years, being implemented in violation recording projects (since 2007) which were used to improve the algorithms in these years. This engine recognizes the digits and letters introduced to it and also extracts the strings of the license plate. It also calculates the 3-D location of the plate using “Machine vision” algorithms in the 3-D world.

The most important special capabilities of the ANPR engine of the Karabin camera are titled as follows:

Plates in different colors are legitimate in some countries (such as Iran). The mentioned difference is such that reflected light from some of them are completely contrary in different hours of the day. So, accurate identification of these plates in all the possible conditions is always challenging; but lighting and imaging systems and also ANPR engine used in Karabin embedded camera is exactly developed suitable for the LPR purposes and acts as an integrated system; so it is able to read different types of license plates in various colors and styles.

Designation difference and distinctions of characters in license plates have already been considered in some countries. But in some others, there are very similar characters in license plates, which can be really difficult to distinguish. For example, <<س and ص>> are very alike in Iran’s license plates. So identification of them is a serious challenge. The issue is bolded particularly when a majority of a city’s plates contain pairs of similar letters as mentioned. There will be a significant decrease in the final accuracy of the system if it cannot distinguish these letters from each other. The ANPR kernel of the Karabin embedded camera has been designed with high resilience to such cases so it can virtually identify similar characters. This has led ANPR kernel of the Karabin camera to an accuracy of more than 95% in recognizing only these two characters (ص and س ) from each other (according to statistics coming from practical real-world results in cities with the majority of plates containing letters <س> and <ص>.)

It is absolutely acceptable to expect a system to work properly in any weather conditions and its performance not to be affected significantly by bad environmental conditions. Part of this resistance is due to the system hardware’s resilience to environmental conditions, but in terms of performance, it is the ANPR kernel’s potentials that make the system powerful in mentioned situations. Weather diversity in Iran is vast and Karabin Embedded camera has been utilized in hot and dry desert to very cold and mountain climates in practice, so its performance has been significantly successful in all circumstances.

Wide shot photography is used in Karabin imaging, so naturally, it is likely to have many license plates in a shot. The design of the algorithm and the processing power of the Karabin camera make it able to read the license plate of vehicles no matter how many vehicles are there in the picture, all of them can be distinguished, and traffic recording operations or violation recording is done simultaneously. Also, if there are several defined original plate, LPR kernel of Karabin camera will automatically distinguish the original defined one and read it.

The embedded camera also has the ability to have many different types of license plates defined for it, so a Karabin camera can recognize and read multiple types of plates defined with different formats at the same time.

Any so-called ANPR software naturally reads under some circumstances. But the value, worthiness and robustness of an ANPR kernel is demonstrated when it comes to unusual and rare conditions. In practical condition, we encounter plates that are very dark because of dirt or have got out of the normal and clear state due to physical changes, such as an inappropriate location of the rivets, being damaged and broken, being placed under the car bumper or behind the rear/front window and other plate problems. The real power of an ANPR core is demonstrated in such cases. Below are listed some examples of successful Karabin performances:

The ability to read under perspective and intense angled license plates

A great number of algorithms and LPR software perform well only if the image of license plates is direct and without perspective effect, but an operation is predicted in processing engine of Karabin which eliminates the perspective effect and deflections of the plate. Therefore, through this preprocessing level, Karabin Embedded camera will be able to read the plates of vehicles which are turning to the right or left or set inaccurately. Also, this ability is applicable in ANPR vehicle for parking border violations which the plates are seen angled or with high perspective effect.

The ANPR image processing kernel has been designed in a generic and futuristic manner, so that any new style and character can be added in the shortest time, thus Karabin cameras will be applicable in different countries. The following types of license plates are allowed in Iran, which now the cameras have the ability to read all of them simultaneously.

As we can see, only in Iran, there are different types of plates with various styles, characters, and even colors and reflections. The simultaneous reading of this set of plates (in practice, there are other types of plates in Iran which are not listed here) indicates the strength and universality of the ANPR engine of the Embedded Karabin camera.

It is worth noting that adding new characters or even new formats (license plates from a new country) is possible for detection and reading in less than two weeks.

The final success of the LPR process not only depends on the strength of the ANPR kernel but also making the proper image of the plate is a prerequisite for this aim. For this purpose, the best imaging elements and related optical components are assembled in Karabin camera by LPR expertise engineering, and best settings are derived and applied for LPR imaging by utilizing intelligent feedback algorithms.

In order to illuminate license plates during the night and also to overcome inappropriate lighting conditions (including shadows), LPR cameras are equipped with infrared illuminators. The stronger the illuminator, the higher the signal-to-noise ratio in image processing input, and the result will naturally be better in practice. In other words, regardless of the difference in ANPR kernels power, if we provide a better image for each algorithm, obviously we can expect a better result in the output.

The Karabin embedded camera is equipped with a high-power infrared illuminator (with an incredibly high Luminous Flux of 20,000 mW).

Therefore, the Karabin Embedded camera is high above the other similar products in terms of plate imaging, which is a prerequisite for subsequent processing. Some of the similar products have a poor internal IR illuminator, or do not have this equipment at all, so the IR illuminator must be installed outside the camera body.

For the ideal image, in addition to the use of robust hardware, we need to accurate adjustment of the lighting and imaging system. The built-in algorithm of the Karabin embedded camera uses a mechanism based on the feedback from license plate’s images to adjust the lighting and imaging units more precisely. Thus by combining environmental conditions and feedbacks from license plates present in the scene, the best settings for imaging by the system are intelligently applied. It should be noted that many similar systems do not have a definite scenario to adjust the optical settings for their camera and illuminator. Consequently, whether they are set to automatic mode based on the overall environmental conditions of the scene, for which intense reflections and shadows will become a weak point for the system, or a large number of images with different lighting conditions is created, so that there is a chance to have an appropriate image between these frames, but this method also adds a significant cost to the system, which in practice will hinder applying more powerful image processing algorithms.